A similar problem can happen after an ankle sprain. As the torn or ruptured ligament heals, the body responds by forming too much scar tissue along the front and side of the ankle joint. Dorsiflexing (upward bend) the ankle can trap the tissue between the edge of the ankle joint, causing pain, popping, and a feeling that the ankle will give out and not support your body weight.

Over time, damage from past ankle sprains may also lead to the formation of small projections of bone called bone spurs. Bone spurs can form along the bottom ledge of the tibia bone or on the upper surface of the talus. As the ankle hinges into dorsiflexion, the bone spurs may begin to jab into the soft tissues along the front edge of the ankle joint, causing symptoms of anterior impingement. 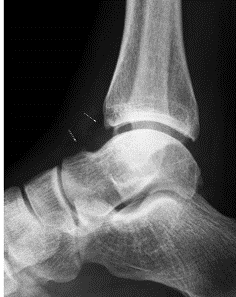 Anterior ankle impingement may feel like ankle pain that continues long after an ankle sprain. The ankle may feel weak, like it can’t be trusted to hold steady during routine activities. When anterior impingement comes from ligament irritation, pain and tissue thickening are usually felt in front and slightly to the side of the ankle. This is the area of the anterior talo fibular ligament. The pain worsens as the foot is forced upward into dorsiflexion. If the ligaments have irritated the synovium of the ankle joint capsule, throbbing pain and swelling from inflammation (synovitis) may also be felt in this area.