PTTD is sometimes also referred to as ‘adult acquired flatfoot’ because it is the most common type of flatfoot developed during adulthood. Although this condition typically occurs in only one foot, it may develop in both feet. PTTD is usually progressive, and can get worse over time if not treated early.

Causes
Overuse of the posterior tibial tendon is often the cause of PTTD. In fact, the symptoms usually occur after activities that involve the tendon, such as running, walking, hiking, or climbing stairs.

Symptoms
Symptoms of PTTD may include pain, swelling, flattening (drop) of the arch and an inward rolling of the ankle.  As PPTD becomes more advanced, the arch flattens out even more and the pain often shifts to the outside of the foot. The tendon usually has deteriorated considerably and arthritis often develops in the foot and in severe cases in the ankle. 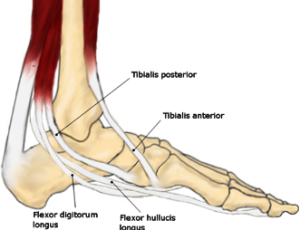 Treatment
The progressive nature of PTTD calls for early diagnosis of the disorder and early treatment for effective treatment. If treated early enough, your symptoms may resolve without the need for surgery and the progression of deterioration can be stopped.

PTTD is usually treated non-surgically and at Sydney Foot Clinic the treatment options offered include;